The PRINCE2 2017 edition contains many issues. More than ever, it seems to be largely written from a wrong perspective and as a result it often deviates from the own principles.

For many years (IT) suppliers tried to pretend they used and even trained PRINCE2. But in their cases, it only resulted in the very ineffective PINO (PRINCE In Name Only). In the 2017 version, they now managed to implement some of their points in the new version. The result is a largely inconsistent version with a long list of issues. I start here with the origin of many issues, three words that the reader will find in every chapter: "or the customer".

PRINCE2 is a customer's approach to the project

Anyone who really understand PRINCE2, knows that the approach always described a project from the perspective of the customer. That is an unusual way; many other approaches like PMBoK (PMI), IPMA but also largely the upcoming Agile approaches are based on supplier's perspectives.

Years before in 2009 PRINCE2 first introduced the Principles, I already wrote an article about the differences between PRINCE2 and PMBoK. This article, which has since been one of my most popular works, introduced three main differences that have later been described as PRINCE2 Principles. These Principles are all far more important from a customer's perspective than from a supplier's:

It is very important to start with the customer's perspective. If it is not clear what long-term effects are sought by the customer, it will almost be impossible to deliver what is needed. This why the Business Case and the principle of Continuous Justification are so important, but also why a supplier can't primarily work with them: a supplier by definition has a different, conflicting Business Case and will by definition have a short-term view on a project.

If the necessary quality (Focus on Products) is not defined properly by the customer, based on required benefits, it will be very hard to deliver by the supplier. Almost by definition, a supplier has a focus on their activities, not on products. A supplier's view on quality will always be different from a customer's view.

So, why the words "or the customer" in every chapter? Where did they come from?

Many suppliers have a distorted view on PRINCE2. Often they attempt to justify their own views by pointing at the indeed very important Tailoring Principle. But applying Tailoring does not mean that the other Principles should be ignored. A supplier writing, maintaining and monitoring the Business Case will simply not work; they do not have a proper understanding. And, more importantly, they have conflicting interests.

PRINCE2 and IT suppliers

Many suppliers, especially from the IT industry, do not realise that PRINCE2 is not for them. And even if they understand this fact, they will play it down for commercial reasons. This is why PRINCE2 often does not work in real life when dominated by IT. It explains the unfortunately huge amounts of PINO, especially in IT dominated environments.

PRINCE2 (not) for suppliers

Fortunately, I am also often asked to explain this issue by people from typical supplier's organizations. This was why in 2011 I described the consequences in a Whitepaper. It was called PRINCE2 (not) for Suppliers. In this paper, another one of my most popular ones, I explained the issue in more detail and supplied the ways in which a supplier could still use PRINCE2, but only under certain circumstances.

The customer of a process is the next process

In this view one team can also be seen as a customer from another team, but that is a point that will be out of the scope of this discussion. However, the ideas about managing interfaces through quality as expressed in another blogpost are significant.

So, what needs to be the situation when the supplier wants to use PRINCE2 for their part of the project? In the context of this discussion, let's take a look at the diagram of the organizational view of the PRINCE2 (not) for suppliers paper. Here we will see that in a customer's project, there is a project manager and there are (probably) team manager. A team manager is often seen by the supplier as a project manager but in PRINCE2 terms they are not.

What is relevant is that a supplier will also mandate their work based on their own business case (in that sense their corporate management are also a customer of their team). If they do not see their assignment as profitable (in any way), they will not show up. So, whoever is seen by the customer as the supplier's representative, is seen in the supplier's organization as accountable for their supplier's business case. 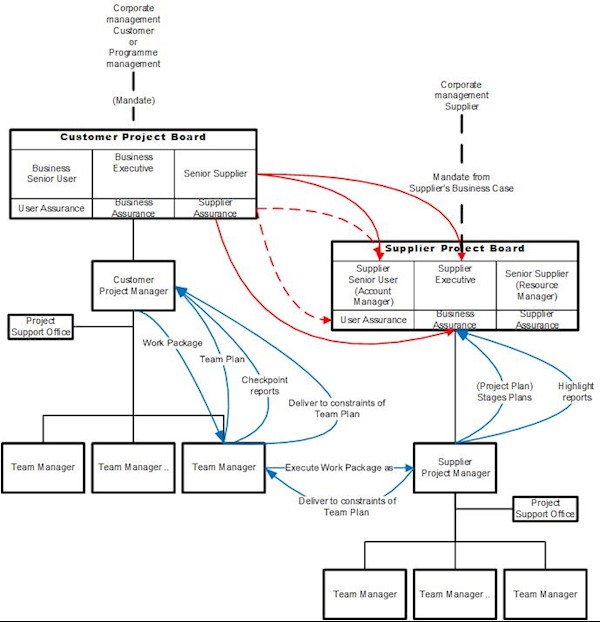 The entire project is outsourced

But what if the entire project is outsourced to a supplier? Is that not a situation where a customer mandates a supplier's project?

Not really. Nothing much changes. A customer and a supplier sign a contract and the supplier will deliver whatever the contract specifies. Whether the supplier is doing this in the form of a project or not, is irrelevant to the contract. If the supplier decides to do the work in the form of a contract and decides to use PRINCE2 as the approach to control the project, should not be a concern specified in any contract because the customer decided to outsource the entire project including the control. Remember: this is a best practice. Not a common practice. In the common practice many projects fail unnecessarily.

This is what the adjusted organization would now look like: 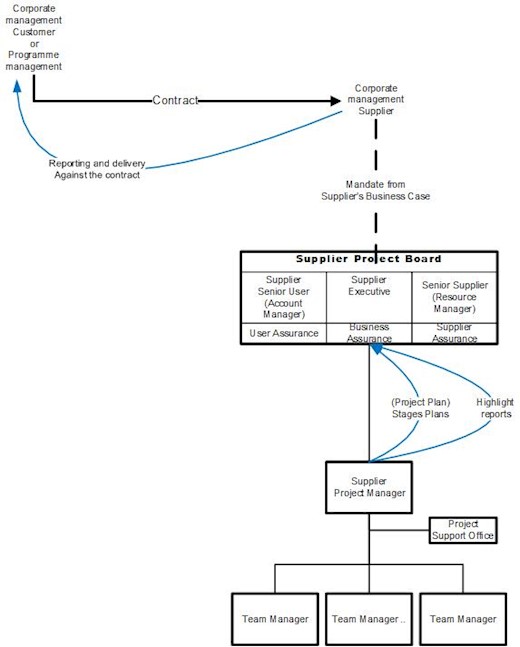 The conclusion must be that a project is always mandated by Corporate or Programme Management. There is absolutely no need to introduce the phrase "or the customer". Unless there is a misunderstanding of what PRINCE2 really stands for.

Is this really important?

I think so. Otherwise I wouldn't have written this article. The expression “by corporate management, programme management or the customer” is potentially confusing. More importantly, it indicates a supplier’s way of thinking that is not in line with PRINCE2 and its Principles.

In the 2017 version there are many other issues related to this issue. Some of them are not new and I have escalated them before, unfortunately without a reaction. Not following up an issue is obviously not according the PRINCE2 guidance so not setting a good example...

Take a look at what was written about the Team Plan. When you compare this to my paper PRINCE2 (not) for suppliers you will probably see what I mean.

Also the way the Change Authority and Change Budget are described, especially in relation to Off-Specifications, is in my view not correct and an unwanted concession to suppliers.

And there are many more issues related to the issue of "or the customer".

Recently the PRINCE2 2017 version was released. Obviously as a PRINCE2 trainer (since 2002 I have seen five different versions), I was curious to see what the differences were. To be quite honest, I was not pleased at all. The 2017 version contains numerous issues and is inconsistent. A full review and an Issue List is yet to follow but here I descripted possibly the main issue; the main issue because it relates to a way of thinking that is not the PRINCE2 way and results in many other inconsistencies.