AXELOS published the 2017 Edition of PRINCE2. Here is a verdict: is the 2017 edition an improvement? Why or why not? 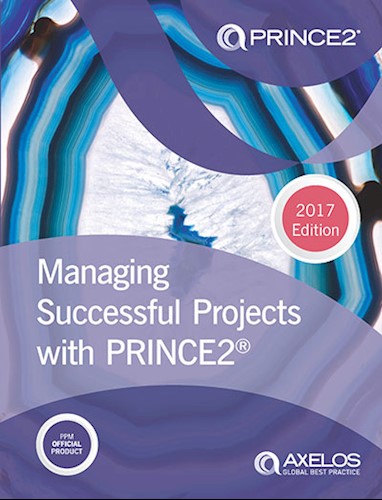 What were the goals?

The 2017 edition was supposed to have more focus on tailoring. Basically, this is a good point. Many organizations and even many individuals have tendency to see and use PRINCE2 as a procedural framework, often combined with rigid prescribed templates for documents. This was never intended but possibly previous versions were not clear enough about the need of flexibility: the Tailoring Principle.

Then there was the influence of the Agile movement. Over the last few years stronger views have been expressed, mainly by the IT-industry, to make development of new functions more flexible and more adaptable to external influences. Even an extension to PRINCE2 was published: PRINCE2 Agile.

Obviously references to the Agile approach should also be included in the PRINCE2 2017 edition.

The structure has not been changed. There are still 7 Principles, 7 Themes and 7 Processes. The essence of the good stuff is still there; it is still PRINCE2 and it is still very recognizable for anyone who used a previous version.

At first glance, the 2017 edition looks more accessible. The great improvement of the old 2009 edition was that the language was less formal and the guidance was largely clarified. At first it seems that the new 2017 is taking this even further. But that is only at first glance. I will come back to this later, after discussing how the goals were achieved.

Then on the Agile topic. This is where it really goes wrong. A number of statements are made about using an agile approach to PRINCE2 but the problem is that almost every single suggestion always already was part of PRINCE2 (apart from some really low-level operational suggestions). By placing the suggestions under an Agile header, the suggestion is also enforced that an agile way of working is something special that needs special considerations. It could easily turn the audience away from "normal" best-practices as often happens when enthusiasts propose something as "new and modern" even when it clearly is not new and modern at all.

Even worse: the guidance regularly suggests that the Project Board makes decisions on operational agile issues. A properly functioning Project Board would not like to be bothered with these issues (Manage by Exception) and would rather leave these decisions to the Project Manager and/or Team Manager.

The PRINCE2 2017 edition has a number of major issues. Many subjects have been simplified and some subjects that are not seen as the core of PRINCE2, have been marginalized. In principle, I see this as a very good initiative. But the reality is that the simplification often went too far and led to a great number of inconsistencies and even incorrect interpretations.

While there are many inconsistencies and omissions in the Themes, they also suffer from a lack of nuances. The processes however contain long lists of bullets; they are described in very abstract ways which suggest that the writers themselves had reasonable, possibly even good knowledge of PRINCE2 but also lacked understanding of how PRINCE2 should be applied in different circumstances and what (especially larger) projects really need. Again, possibly the influence of mainly operational agile specialists? 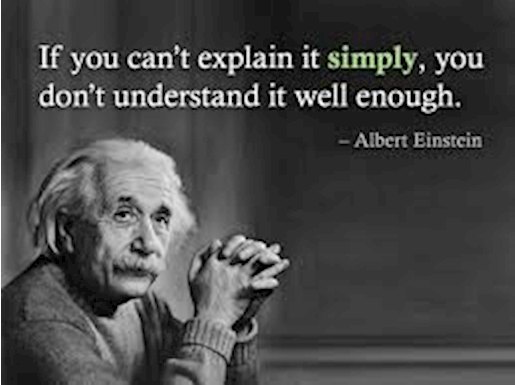 A clash of cultures?

Because suppliers have their own, conflicting business case and because suppliers usually have a focus on their own specialism (work, rather than products), PRINCE2 is usually very hard to understand for people from the typical supplier's side. They can gain knowledge about PRINCE2 and also pass the exams. But, based on 15 years of experience as an Approved Trainer, they usually do not really understand PRINCE2. 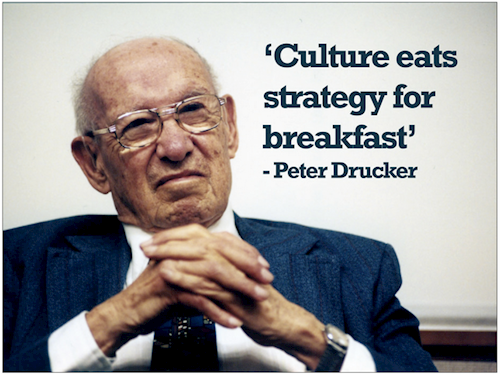 PRINCE2 always was a customer's approach to manage their investment. Its position and differences with other views and cultures (!) can be illustrated by this diagram: 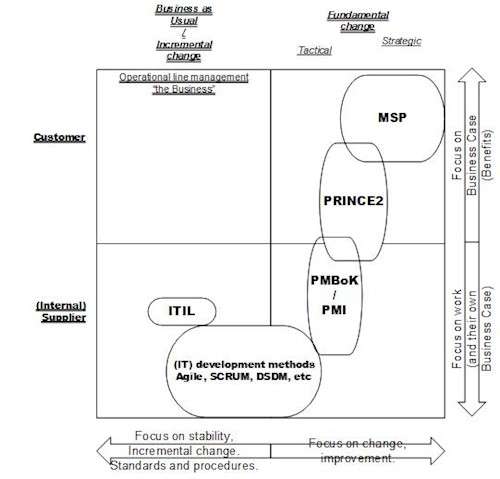 PRINCE2 always focussed on the Business Case and saw the project as an investment. This concept sounds logical and straight forward. But the reality is different. The more traditional approach, as voiced by approaches such as PMI/PMBoK see projects as needed to be delivered by a supplier. Rather than looking at a project through the business case, the project should be constrained by time and cost to keep the supplier's contract under control. This is basically the difference between a long-term investment and a short-term cost view.

As a result, typical supplier / delivery organizations have massive difficulties fully understanding the ideas about the business case, the PRINCE2 organization and the focus on products and quality. With my experience discussing these subjects with staff from especially IT-suppliers (usually even their trainers!), I recognized these difficulties when I looked at the PRINCE2 2017 version.

Things get even worse when PRINCE2 is discussed with people from staff departments, like Finance, HR and IT-support. This is usually where the highest resistance to change is. It is also where it is most likely to see a procedural and mechanical approach, also to change. From the ITIL perspective there always was a drive to make PRINCE2 highly bureaucratic, mechanical and document/template driven.

It is not too surprising that especially in ITIL-environments there is a need for the more 'Agile' approaches, but strictly controlled by time and cost. And usually only for relatively small incremental change.

This perspective is also heavily voiced in the new 2017 version of PRINCE2.

Since I took my own training and became a trainer in 2002 I have been working with several versions of PRINCE2. Every version was in my eyes an improvement. Apart from some issues in the 2009 version, I thought that overall that version was excellent and I did not see a real need to replace it. Possibly there should have been more integration with MSP, especially in the area of the MSP Blueprint. This would in my view solve the idea that PRINCE2 still facilitated projects dominated by technical skills: especially IT-projects. My take was always that there should not be IT-projects with an IT-project manager. There should only be business justified projects, possibly with an IT-component, which would be supported by the MSP Blueprint concept.

The PRINCE2 2017 edition did not correct the issues of the 2009 version. Instead it created many more issues, probably mainly caused by the strong perspective of IT-suppliers and their Agile ideas. A list of my issues can be found here.

Unfortunately PRINCE2 2017 is a very inconsistent version with a great number of issues. Hopefully this will be recognized soon and corrected.