A model to understand and predict culture

The model is based on: 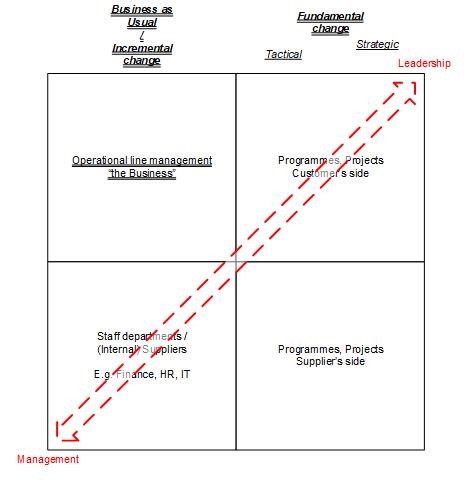 The bottom row usually does not have a direct interaction with the customer. This is where staff departments or external suppliers of the organization are placed. Think of departments such as Finance, H.R. or an internal IT department. 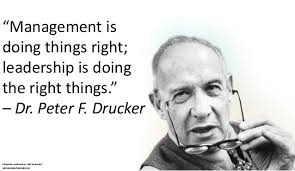 Let us focus on the Overhead square, especially the staff departments. There seems to be a growing influence, even power in this area. In organizations that have limited or even no competition, there is no need to be effective or to focus on stakeholders. This is why many, if not all public-sector organizations focus on management and efficiency. However, their short-term focus and the lack of interest of effectiveness makes their efficiency meaningless. It creates large, costly overhead organized in silos with every silo working very "efficient" doing a lot of meaningless work but together wasting a lot of money. 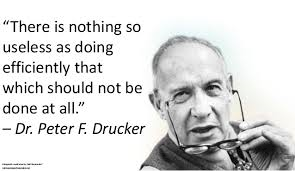 With centralization of capital, so by decreasing competition, large corporations tend to create the same culture. This can be observed in corporations listed on the stock market and maybe even more in corporations held by venture capitalists. These organizations are normally "led" by typical managers with a very prominent position for a CFO (Chief Financial Officer).

The common denominator is probably the lack of clear owners (individuals); it is common knowledge that organizations with clear ownership (family owned) are far more effective. 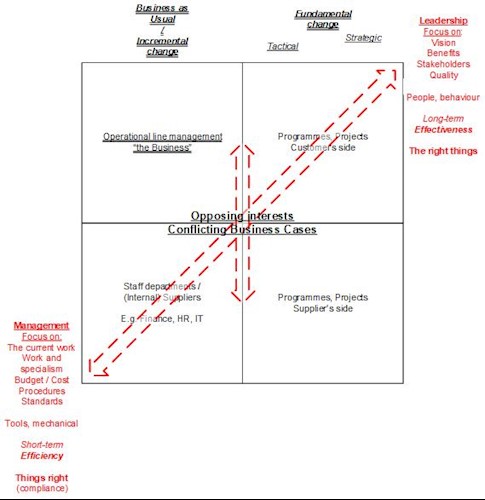 When centralized staff departments gain power, it also becomes clear they have different interests to the departments they are supposed to support. In this way, they start to act more and more just like external suppliers. This will become clear when they have their own goals and budgets.

An example was an IT director in a large bureaucracy. This person started project after project (so he sat in the bottom-right square) without demands or requirements of users. Because he had strong leadership skills, he acted as if his department was a sort of enterprise and the IT developers he led often mentioned that IT was the core business of the organization, while this public-sector organization's goals and duties were mostly legal.

Note: the same organization's finance department were also adamant that finance was the core business.

Needless to say, most of his projects failed. Even when success was claimed (finished on time and to budget, another poor focus of staff departments), usually the deliverables of the projects were never used, because there was simply no need for them or they lacked quality.

This person was allowed to gain influence. His power, budgets and staff grew. This often becomes a sort of self-fulfilling prophecy: this person makes a lot of noise, seems to have a vision and talks about difficult technology with an interesting jargon. This is why he gets more influence and power and is able to make even more noise. Supported by the increasing power of staff departments, his budgets and power grow even more. An objective assessment of benefits and contribution is hardly ever done because "innovation is important", especially in technology departments.

Another example can be found in a large Dutch technology company. About two decades ago this company nearly went bankrupt. When I was hired as a consultant, I talked to several people. What was really amazing was that the common view was that the company was in trouble because "those stupid customers don’t not realize how brilliant their products are". Typically an organization where the R&D department (again, the bottom right square) was dominant.

This company was eventually saved when a new CEO was appointed. This new CEO had a more consumer-based background and focussed a lot more on his customers than on R&D and technology. This person seemed to be largely placed in the top-right square.

No change and leadership in staff departments?

Obviously there will be change in staff departments as well. But the number of failing projects in this area may well be an indication of the surplus of management and the lack of leadership; consider many ERP projects usually started and were managed by this area. A focus on technical skills, standards and efficiency but what about effectivity? 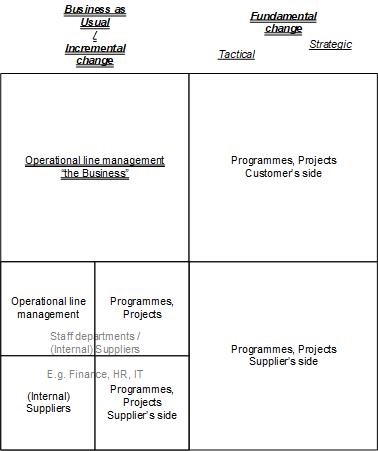 Still, there will be change in this area as well. The cynical aspect is very often that staff departments now will complain about each other's lack of effectiveness and flexibility.

When staff departments are allowed to increase their power, the result will be predictable. The quality will drop dramatically and their customers will feel increasingly dissatisfied. Depending on the level of competition, the organization will become obsolete. The organization can eventually only exist if they exist as a monopoly (e.g. public sector) or in competition with a small number of competitors that all behave in the same way (e.g. the financial sector or the telecom sector). In many large organizations, unfortunately short-term management is in charge. This is often expressed by the powerful position of the CFO.

On the other hand, a large number of companies won't survive without proper control by management.

The point is: there should be a healthy balance between leadership and management. Leadership without control will end in chaos. Management without leadership will end in rigid bureaucracy without quality.

A large Dutch bank only barely survived the 2007 financial crisis but only with help from the Dutch taxpayer in the form of a loan. A few years later the bank, while still paying off this loan, wanted to start paying large bonusses again and, quite predictably, the Dutch public was outraged because of the link between the bank's problems and the bonus culture. When asked for a reaction, the bank's CEO (a former CFO) told the press he did not understand the outrage because everything was within the rules. Typically a reaction from a manager, not leader.

Another large Dutch bank had to be saved by the taxpayer. This time the bank had to be taken over by the Dutch state. A previous Finance minister was appointed as CEO. When, a few years after the crisis, the bank wanted to significantly increase the board member's salaries, again there was predictably public outrage. The CEO's reaction was that he did not understand the outrage because everything was within the rules. Again, typically a reaction by a manager, not a leader.

Before this same man was appointed CEO of this large bank, for a relatively short period of time he was the CFO of a smaller bank that went bankrupt during the crisis, mainly because of a very poor business model. When asked why he made no attempt to improve the business model this person stated that it was not possible to do anything about it because no rules were broken. A typical technocrat, a typical manager.

These were three examples of typical managerial reactions. A leader would never have reacted this way. A leader would not even have considered their action because of the focus on stakeholders, rather than on rules and procedures.

As PRINCE2/MSP trainer I often get the comment that PRINCE2 is a very rigid and procedural approach that does not add value to project management. A lot of people would call this typically PINO: PRINCE In Name Only. This reality is closely related to this discussion.

I originally developed this model using the leadership views of MSP (Managing Successful Programmes) and the Customer/Supplier basis of PRINCE2 to show what the bad influence was of the many ITIL trainers also delivering PRINCE2 training.

Over the years PRINCE2 has been dominated by IT staff, to a large extend by ITIL trainers. Also PRINCE2 was largely implemented by IT PMO's (Project Management Office). IT support (ITIL) and in many cases PMO's are positioned in the bottom left square. This is why IT support is often seen by users as ineffective. It is also why PMO's are usually ineffective and often disregarded by projects.

This is also the explanation why PRINCE2 and even MSP will be ineffective and most probably also bureaucratic and rigid when trained and/or implemented by ITIL specialist, many PMO's and even IT Project Managers. 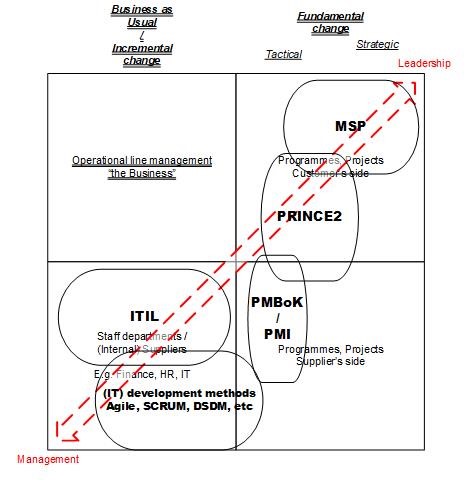 Possibly surprisingly to many people, I also position the Agile approaches mainly in the bottom squares of my diagram. I see that often Agile approaches are used in relatively small operational changes and are driven by suppliers: IT departments and IT suppliers.

And, what can not be underestimated: a basic rule of Agile development is that Time and Cost are supposed to be fixed. Focus on time and cost is typical for rigid management behaviour. My conclusion: Agile (in the IT promoted version) is not agile at all and will usually lead to low quality. Many users I have talked to, have confirmed this view.

After I published my review of the PRINCE2 2017 Edition, I posted a link on several LinkedIn groups. The Admin of one of these groups, for project and programme management, refused to approve and publish my post. Here was the reaction by this Admin:

Hi Nico, this is a good topic but you must include enough information in your post for members to be able to engage in discussion without needing to click away from the page.

Can you please re-post with your main points included and a question for the group?

Because of the context of a Best-Practice group and because of the text (“you must (comply)”) this reaction just screamed ITIL to me. When checking the profile of this person, I was right: indeed, an ITIL specialist that “infiltrated” the project/programme community.

A few days after I published this post, I discovered an article by Prof. Gary Hamel, published almost at te same time on Harvard Business Review. It describes the extend of bureaucracy. The parallels with my post are significant.

What do you think?

Obviously, this is just a model. It will work differently in different environments. Also, there are many other influences, e.g. local cultures. But in general, for me this model explains a lot of behavior.

What do you think? Please leave a message below if you have any comments or questions.